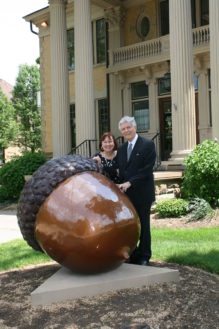 Al and Josie Lubiejewski have the kind of epic love story you watch in movies.  Both began life with humble upbringings and born into immigrant families who worked hard to give them opportunities for a better life.  While growing up in the same city, their paths finally crossed, and they fell in love, married, pursued successful careers and have truly become the definition of the American dream.

“My parents came from Poland with one spoon and one fork, but they had so much hope for our family,” said Josie Lubiejewski.  Al Lubiejewski described the same kind of pride and dedication from his family growing up as well.

Both Al and Josie worked extremely hard to fulfill their families hope for a better life. They were both provided opportunities that helped them along the way. These eventually led Al Lubiejewski to own his very own law firm, where he still practices today, and Josie rose up the ranks to become the president of Penn Attorney’s.

“We have both been given many opportunities,” said Al Lubiejewski. “We feel giving back to our communities is most important so others may have the same kind of opportunities we enjoyed.”

This is why the Lubiejewskis through the help of their financial advisor, opened a Donor Advised fund with The Erie Community Foundation. They both feel an extreme pride for Erie because “Erie is home.”

When referring to creating their donor advised fund Josie said, “We want to leave something for future generations. We believe in the work of the Foundation and we believe in working together to make Erie better.”