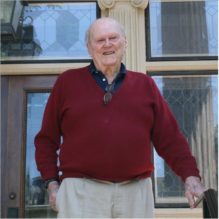 “When I came here, I was looking for a community. Then I realized I was helping to create one,” said Ryan Albright, Ohio State University student. The Erie Community Foundation donor Bob Frenzel embodies this quote to the fullest extent. In 1994, Frenzel and his wife Kathleen established the Foundation’s 100th endowment fund. “The Erie Community Foundation was the first organization that ever made me think about my contributions to a community’s development,” said Frenzel. “I like how they handle my money to help me make a positive impact locally.”

Frenzel began donating to the Foundation by giving an annual gift in the 1980s. He credits Foundation President Mike Batchelor with convincing him to turn his annual gift into an endowment fund. “I knew establishing a fund would make my gifts last longer and provide benefits to the community for a long time to come,” said Frenzel. Today, the Robert & Kathleen Frenzel Fund is worth over $350,000, and $154,000 has been granted to local nonprofit organizations.

Throughout his years spent working at General Electric and Elgin Electronics, Frenzel and his family moved nine times. He has lived all over the United States, but felt most at home in Erie. “If someone is thinking about starting a fund at The Erie Community Foundation, I would tell them to do it without hesitation,” said Frenzel. “Then, you become more involved and interested and it will keep you going like it has me for so many years.”